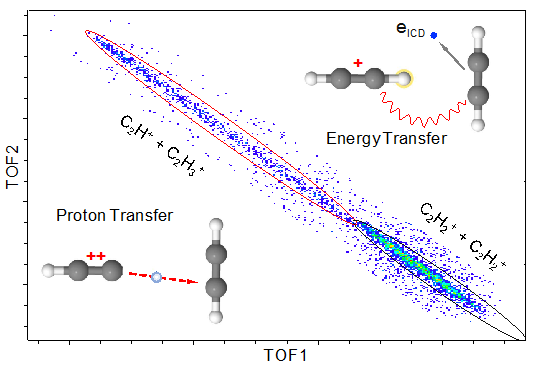 Although the biological hazard of alpha-particle radiation is well recognized, the respective molecular mechanisms of biodamage are still far from being understood. Irreparable lesions in biomolecules may not only have mechanical origin but also appear due to various electronic and nuclear relaxation processes of ionized states produced by an alpha-particle impact. Two such processes were identified in the present study by considering an acetylene dimer, a biologically relevant system possessing an intermolecular hydrogen bond.

The research was conducted by the atomic physics group led by Professor Xinwen Ma in collaboration with School of Science, Xi’an Jiaotong University, Max Planck Institute for Nuclear Physics, Physical Chemistry Institute, Heidelberg University. The experiment was performed by employing a reaction microscope mounted to the 320 kV platform for multidisciplinary research with highly charged ions at the Institute of Modern Physics, Chinese Academy of Sciences. The He2+ beam has an energy of 200 keV and upon irradiation by alpha particles, acetylene dimers break apart via Coulomb explosion. The study has revealed two essential mechanisms responsible for this phenomenon. The first process is the already well-established intermolecular Coulombic decay of inner-valence-ionized states. The other one is a novel relaxation mechanism of dicationic states involving intermolecular proton transfer, as shown in Fig 1, a proton is transferred from one acetylene molecule to the other one over a huge distance of 4.4Å, resulting in the fragmentation channel: C2H+ + C2H3+. Both processes are very fast and trigger Coulomb explosion of the dimer due to creation of charge separated states. Further theoretical analysis demonstrates that these processes are general in hydrogen-bonded systems and predicted to occur also in alpha-particle-irradiated nucleobase pairs in DNA molecules. Fig 2 shows an example of DNA double-strand breakup induced by intermolecular proton transfer: after double ionization of thymine, the proton moves from thymine to adenine along the intermolecular N-H···N hydrogen bond. In both processes, Coulomb repulsion of the produced molecular cations leads to fragmentation of the base pair.

The results are published as a communication in the peer reviewed world leading Journal --Angewandte Chemie International Edition. The work was support by the National Key Research and Development Program of China and by the National Natural Science Foundation of China.